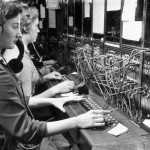 The age of the copper land-line is nearing its end, but traditional phone lines aren’t going quietly: new rules from the FCC now require service providers notify customers of the impending removal and drawbacks of switching to a VOIP line three months before killing a copper network. It sounds like a reasonable move — customers need to know that the technology replacing their traditional land-line won’t work during a power-outage without an external power source — but not everybody at the FCC is happy with the new rules. “It appears that Chicken Little rules the roost, ” writes Commissioner Ajit Pai in a dissent to the updated transition rules. “By dragging out the copper retirement process , the FCC is adopting ‘regulations that deter rather than promote fiber deployment.'” Pai argues that the FCC is making it more difficult for companies to modernize their networks because lobbyists are claiming that retiring copper will cause the “sky to fall, ” disrupting services and hurting their business model. He has a point — but wouldn’t you want to be notified if the phone company was changing out your voice service worked? Check out the FCC’s official announcement at the source link below. [Image Credit: Raymond Kleboe via Getty Images] Filed under: Misc Comments Source: Verge , FCC Tags: copper, copperlandline, fcc, landline, phones, telco, telephone