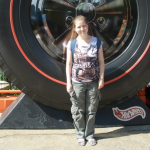 Alexandra Elbakyan won’t let her Sci-Hub pirate site of academic journals die— despite publisher Elsevier’s lawsuit. (credit: Courtesy of Alexandra Elbakyan) We reported a few weeks ago on a popular pirate site for science journals whose oversees admin was being sued by one of the world’s leading academic publishers, Elsevier. Elsevier is the same New York publisher that the late Aaron Swartz had noted in his ” Guerilla Open Access Manifesto ” that told academics and researchers they had a “duty” to free the knowledge they were privileged to read behind Elsevier’s paywall. Because of the lawsuit, which Sci-Hub founder Alexandra Elbakyan has refused to participate in, she’s been engaged in a game of domain-name Whac-A-Mole in response to Elsevier winning court orders demanding the shuttering of the popular site’s domain name. The site allows anybody, not just academics, to access tens of millions of scholastic research articles for free. When Ars interviewed Elbakyan and learned that she had a similar philosophy to Swartz, she had already altered the site’s domain from sci-hub.org to sci-hub.io and changed others because of a court order blocking the .org domain. Now that domain, registered with Chinese registrar Now.cn, has also been killed. That has forced the site to move to sci-hub.bz and sci-hub.cc. This cat-and-mouse domain game is reminiscent of the decade-long game the admins of The Pirate Bay have been playing. When one domain gets lost to a court order, the site springs up on another. Read 3 remaining paragraphs | Comments