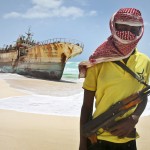 Seaborne pirates just borrowed a page from their land-based counterparts . A Verizon security report has revealed that raiders hacked a shipping company’s content management system to determine which ships were worth boarding, and where the valuable cargo was located. They not only knew when to launch a raid, but the exact crates they had to pry open — they could get in, steal the cargo they want and leave without the risk of a days-long, Captain Philips -style hostage situation. In this case, the pirates still had a lot to learn about hacking. They didn’t encrypt their commands or use proxies, making it easy to trace their activities. They also weren’t skilled enough to compromise systems as much as they wanted. However, those tidbits aren’t about to comfort other shipping companies. If there’s a pirate outfit that’s both well-armed and technically savvy, it could create havoc by plundering ships with relatively little fear of getting caught. Via: Business Insider Source: Verizon

Mad Shelia Is the Chinese Mad Max Ripoff of Your Dreams

Japanese and US Piloted Robots To Brawl For National Pride

Make an Awesome First Impression With a Tetris-Playing Business Card