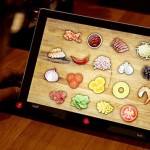 When scanning a menu, are you justifying that Dame Blanche sundae in your mind rather than actually choosing a dessert? Pizza Hut wants to help you skip your super-ego middleman and just let your id order that triple-cheese bacon pepperoni pie directly. It’s ” Subconscious Menu ” uses Tobii’s eye-tracking tech to figure out which of 20 different ingredients you’re looking at on a screen (see the video below). It then takes all of three seconds to identify the pizza you really want based on which you looked at the longest. Pizza Hut says its Subconscious Menu is still in trials, but after testing to a 98 percent success rate, it may eventually appear in restaurants. [Image credit: Lexis Agency/Pizza Hut] Filed under: Cameras Comments Via: Telegraph Source: Tobii (YouTube)

View post:
Pizza Hut’s eye-tracking menu knows what you want before you do