Enlarge / Pope Francis holds his homily during his weekly audience Wednesday in St. Peter’s Square in Vatican City, Vatican. Pope Francis is warning the world’s youth to be wary of the “false image of reality” portrayed in social media and on reality television shows. In a written message the Vatican issued Tuesday, the pontiff cautioned followers not to let the Internet dilute the church’s message. The speech will be released in video format on World Youth Day on April 9. “History teaches us that even when the Church has to sail on stormy seas, the hand of God guides her and helps her to overcome moments of difficulty. The genuine experience of the Church is not like a flash mob, where people agree to meet, do their thing, and then go their separate ways,” Francis wrote. Read 5 remaining paragraphs | Comments 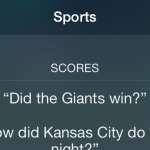 Here’s a Massive List of Stuff You Can Ask Siri to...