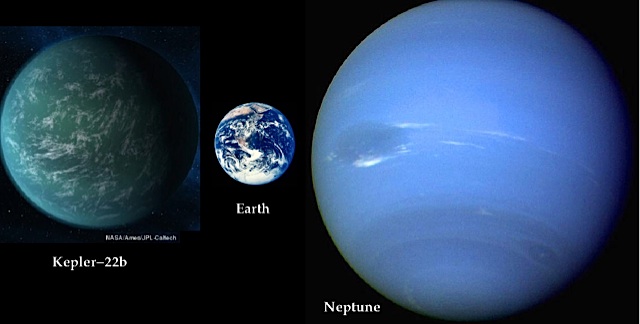 Kepler-22b is a newly confirmed exoplanet, orbiting a Sun-like star 600 light years away from Earth. The exoplanet sits in the “habitable zone”—a range of orbits around a star that are, based on what we know about life on Earth, most likely to provide the right conditions for life to happen.

That is pretty damn cool. But it does not mean there must be life on Kepler-22b. As Phil Plait explains on the Bad Astronomy blog, there’s a lot we don’t know about this exoplanet yet, and “within the habitable zone” is not a guarantee of habitability. Case in point: Our solar system. Earth is within the Sun’s habitable zone. But so are Mars and Venus, and you may have noticed that they are not especially teeming with life.

Kepler detects planets when they transit their star, passing directly in front of the star, blocking its light a little bit. The bigger the planet, the more light it blocks. The astronomers going over the data determined that Kepler-22b is about 2.4 times bigger than the Earth. The problem is, that and its distance from its star are all we know. We don’t know if it’s a rocky world, a gaseous one, or what. It may not even have an atmosphere!

Another good post to read on this subject is Matthew Francis’ explanation of “habitability” on the Galileo’s Pendulum blog. Even the statement, “Kepler 22-b is within the habitable zone,” comes along with a lot of assumptions that may or may not turn out to be true.

The following factors are needed to calculate whether a planet is in the habitable zone: The temperature of the host star: the hotter the star, the more it emits light of all wavelengths … The size of the host star: a large star emits more light from its surface simply because there is more surface area … The albedo of the planet: how much light gets reflected back into space … Hand in hand with albedo comes the composition of the planet’s atmosphere—if it has one.

When we say Kepler-22b is in the habitable zone, we’re assuming that it has the same atmospheric composition and albedo as Earth. We don’t know that. And it’s a big leap, bearing in mind (again) that there’s not even another planet in our own solar system that shares those characteristics.

I swear, I’m not a fun-hater. Kepler-22b is awesome. Just keep it in context and know that there’s still a lot we don’t know about this thing.