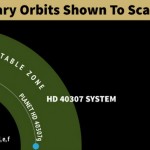 When we do eventually reduce the Earth to an uninhabitable wasteland through our careless consumption of natural resources and inevitable nuclear wars, we’ll need someplace else to go. We haven’t picked a successor yet, but a new candidate has been identified a mere 44 light years away, orbiting dwarf star HD 40307. The super-Earth orbits its host star right at the edge of the so-called habitable zone , where a stable atmosphere and liquid water are possible. We don’t know for sure the planet is, in fact, capable of supporting life, but there’s at least a chance. And given that it’s roughly seven-times the mass of Earth, it shouldn’t have much trouble playing host to our exploding population. Filed under: Science , Alt Potentially inhabitable super-Earth discovered in 6 planet solar system originally appeared on Engadget on Thu, 08 Nov 2012 10:27:00 EDT. Please see our terms for use of feeds . Permalink    |  Astrobiology Magazine  |  Email this  |  Comments 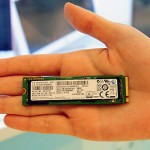