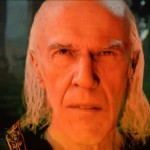 Remember the Emotion Engine from back in the PS2 days? Well, Sony’s still on about the emotional connection its consoles will bring to gamers — specifically, that of the PS4 . And to showcase the console’s graphical sophistication, Worldwide Studios head Shuhei Yoshida played a 12-minute tech demo of Quantic Dream’s upcoming PS4 title, The Dark Sorcerer . The majority of the demo focused closely on the sorcerer in question, giving gamers an early glimpse of the nuance and hyper realistic expression capable in characters’ eyes and faces. Only a short snippet was shown on stage here at E3, but if you want to digest the entire thing, Sony’s planning to unveil the full 12-minute demo tomorrow afternoon. Gallery: Sony E3 2013: The Dark Sorcerer Filed under: Gaming , HD , Sony Comments