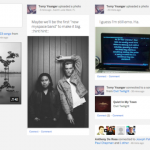 New MySpace Is Now Open to the Public

IRS Left Taxpayer Data Vulnerable and Lied About It