Read this article:
Ram is recalling more than a million trucks for faulty software 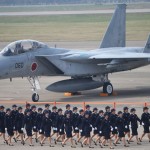 The US will protect Japan against cyberattacks