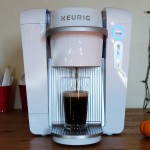 The Keurig Kold: You could just buy a mini-fridge instead