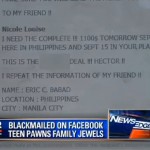 This is the only mushroom in the world that tastes sweet...