An anonymous reader writes: The Raspberry Pi has sold 10 million units — continuing its success as the most popular British computer ever. The computer, about the same size as a credit card, was first released in 2012 and is widely used as an educational tool for programming. However, it can also be used for many practical purposes such as streaming music to several devices in a house. A new starter kit for Raspberry Pi, including a keyboard and mouse, has been released to celebrate the success. The kit also includes an SD storage card, official case, power supply, HDMI cable, mouse, keyboard and guidebook — it costs $130 and will be available in the coming weeks. The Pi, which is manufactured in Wales, has been adopted by pupils, programmers and inventors around the world. Read more of this story at Slashdot. 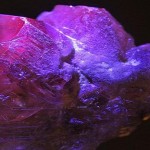 How does a gemstone change color from red to green?

BlockSender Bounces Email Back to the Sender