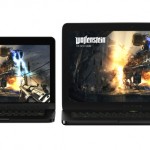 “Thin and powerful” aren’t words we tend to associate with gaming laptops, Razer has always been an exception. The company’s Blade and Blade Pro laptops have been challenging our preconceptions for almost three years now, but the shadow of compromise has hung over each iteration of the product in some form or another. Last year, it was the 14-inch model’s low resolution display — a thinly veiled bottleneck that kept gamers from over-taxing the machine’s GPU. That won’t be an issue for the laptop’s 2014 refresh: Razer announced today that it’s outfitting the Razer Blade with a 3200 x 1800 IPS panel with multitouch support, a Intel Core i7-4702HQ processor and NVIDIA’s new GeForce GTX 870M (3GB GDDR5) GPU. It’s a loud answer to the issues we had with the last generation. It also takes it one step further from the new 17-inch Razer Blade Pro. Like the standard Blade, the 17-inch model has been outfitted one of NVIDIA’s new Maxwell GPUs, specifically the GTX 860M (2GB GDDR5). It’s also kitted out with twice as much RAM (16GB DDR3L), an Intel Core i7-4700HQ processor and Razer’s Switchblade User Interface — a miniature keyboard with 10 keys (each with their own LED display), an LCD driven trackpad / touchscreen and a small suite of apps. Here’s where things get interesting: buyers after Razer’s Switchblade interface will wind up with a lower resolution screen without support for multitouch. Razer told us the Pro’s matte display was a better choice for productivity, and pointed out that 17.3-inches was a bit large for touchscreen gestures. Instead, the Razer Blade Pro will come with a Switchblade “Charms” app for Windows 8, as well as new applications for productivity suites like Maya, GIMP, Adobe Photoshop and Premiere. Razer’s Pro and Standard Blade laptops were always separated by size, processor configuration and the Switchblade interface, it somehow seems different this time around. With more video RAM, a touchscreen and a higher resolution display, the 14-inch Blade seems to be built with entertainment in mind, while the Razer Blade Pro leans more towards productivity with a larger (but lower resolution) screen, more RAM and apps tailored to the needs of multimedia professionals. While both promise to be capable gaming rigs, they aren’t quite targeting the same buyers. Figure out what side you belong to? Start saving: the Razer Blade Pro ships at the end of the month, starting at $2, 299, with the 14-inch Blade following soon afterwards for $2, 199. Check out Razer’s product page for pre-orders, configuration options and eye-candy. Filed under: Gaming , Laptops Comments Source: Razer (1) , (2)