An anonymous reader writes: NASA’s Opportunity rover has been rolling around the surface of Mars for over 10 years. It’s still performing scientific observations, but the mission team has been dealing with a problem: the rover keeps rebooting. It’s happened a dozen times this month, and the process is a bit more involved than rebooting a typical computer. It takes a day or two to get back into operation every time. To try and fix this, the Opportunity team is planning a tricky operation: reformatting the flash memory from 125 million miles away. “Preparations include downloading to Earth all useful data remaining in the flash memory and switching the rover to an operating mode that does not use flash memory. Also, the team is restructuring the rover’s communication sessions to use a slower data rate, which may add resilience in case of a reset during these preparations.” The team suspects some of the flash memory cells are simply wearing out. The reformat operation is scheduled for some time in September. Read more of this story at Slashdot. 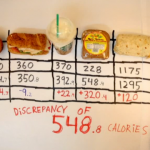 Are There More Calories in Food Than What’s Listed in the...