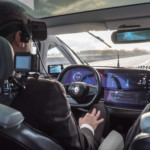 Visit link:
Renault’s concept EV drove me at 80MPH while I wore a VR headset