Nearly five years after it was officially announced and nine years after the release of Doom 3 , we’ve heard precious little about the development of Id Software’s Doom 4 . It seems that silence has masked a troubled development cycle that has been restarted at least once and is currently not all that close to being finished. Kotaku talked to a number of unnamed sources “with connections to the Id Software-developed game” and lays out a tale of mismanaged resources and distractions. Chief among these distractions was Rage , the 2011 release that developer Id thought would put it back on top of the first-person shooter heap. When that game was  savaged by harsh reviews and low sales, Id reportedly halted plans for DLC and a sequel and refocused the entire company on Doom 4 , which had largely languished during the work on Rage . “I kinda think maybe the studio heads were so distracted on shipping Rage that they were blind to the happenings of Doom , and the black hole of mediocrity [the team] was swirling around,” one source told Kotaku. Read 2 remaining paragraphs | Comments 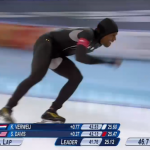 US team to switch speed skating suits due to poor physics