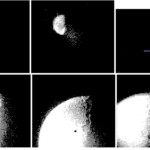 The Game Boy Camera, released in 1998, wasn’t even close to the weirdest peripheral for Nintendo’s classic handheld console and even earned a Guinness World Record for the smallest digital camera in the world. Its 2-bit, 128 x 128 pixel CMOS sensor managed very grainy black-and-white shots, making it far more fun than technically impressive. And yet, a Dutch researcher and tinkerer just used one to catch some charmingly blocky photos of the moon and Jupiter. Astrogphrapher Alexander Pietrow used a universal cell phone mount to strap one of the 29-year-old monochrome workhorses to an appropriately old telescope (built in 1838) in Leiden University’s Old Observatory and aimed at at the stellar bodies. The resulting photos are barely detailed — Jupiter is half a dozen pixels wide — but they’re blocky in a charming throwback to the original Game Boy’s 8-bit graphical style. Pietrow even managed to pick out three of the gas giant’s moons, singular pixels in a field of star dots. (Note that the image below has been blown up 400 percent to make it visible, since the Game Boy Camera takes photos at a whopping 112 x 128 pixel resolution.) Maybe it doesn’t do much for astronomy as a field, but it’s a lovely reminder that space still fascinates at any resolution — that we still find meaning when stretching for the cosmos with the crudest of tools. Via: PetaPixel Source: Alexander Pietrow