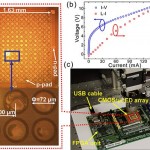 High speed data is already being transmitted by visible light to the moon , so why not in your living room, too? After the Fraunhofer Institute showed off 3Gbps speeds with LED lights , researchers from five UK universities have managed to transmit data at 10Gbps using micro-LEDs with a technique they’ve coined “LiFi.” The team was able to crack the barrier by combining 3.5Gbps streams in each of the red, green and blue frequencies that make up white light. Such a technique could one day work with existing light bulbs, promising higher speeds than current WiFi and increased security — since visible light can’t penetrate solid objects like walls. In addition, a single bulb could theoretically provide connectivity for up to four devices. For now, such devices are confined to the lab, but given the torrid pace of development , don’t be surprised if your data connection is soon a click of the switch away. Filed under: Wireless , Science , Internet , Alt Comments Source: BBC 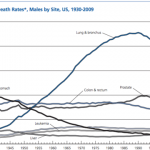 The Cancer Death Rate is Down 20%