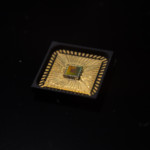 Researchers at UC San Diego have developed a temperature sensor that runs on tiny amounts of power — just 113 picowatts, around 10 billion times less power than a watt. The sensor was described in a study recently published in Scientific Reports . “We’re building systems that have such low power requirements that they could potentially run for years on just a tiny battery, ” Hui Wang, an author of the study, said in a statement . The team created the device by reducing power in two areas. The first was the current source. To do that, they made use of a phenomenon that many researchers in their field are actually trying to get rid of. Transistors often have a gate with which they can stop the flow of electrons in a circuit, but transistors keep getting tinier and tinier. The smaller they get , the thinner the gate material becomes and electrons start to leak through it — a problem called “gate leakage.” Here, the leaked electrons are what’s powering the sensor. “Many researchers are trying to get rid of leakage current, but we are exploiting it to build an ultra-low power current source, ” said Hui. The researchers also reduced power in the way the sensor converts temperature to a digital readout. The result is a temperature sensor that uses 628 times less power than the current state-of-the-art sensors. The near-zero-power sensor has a temperature range of -4 to 104 degrees fahrenheit and could potentially be used in wearables and both environmental and home monitoring systems. One power tradeoff is that it gives readouts slightly slower than currently used sensors, at around one temperature read per second. But the researchers said that shouldn’t be a problem when giving reads on things like the human body where temperatures don’t change too quickly. They’re now working on optimizing the design and improving its accuracy. [Image: UC San Diego Jacobs School of Engineering] Via: UCSD Source: Scientific Reports 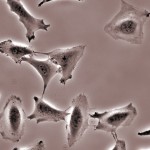 The Human Cells We Use For Research Are Kind of A...