Catalin Cimpanu, reporting for BleepingComputer: A collaborative effort between the Yale Privacy Lab and Exodus Privacy has shed light on dozens of invasive trackers that are embedded within Android apps and record user activity, sometimes without user consent. The results of this study come to show that the practice of collecting user data via third-party tracking code has become rampant among Android app developers and is now on par with what’s happening on most of today’s popular websites. The two investigative teams found tracking scripts not only in lesser known Android applications, where one might expect app developers to use such practices to monetize their small userbases, but also inside highly popular apps — such as Uber, Twitter, Tinder, Soundcloud, or Spotify. The Yale and Exodus investigation resulted in the creation of a dedicated website that now lists all apps using tracking code and a list of trackers, used by these apps. In total, researchers said they identified 44 trackers embedded in over 300 Android apps. Read more of this story at Slashdot. 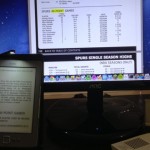