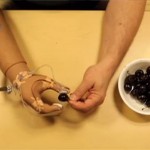 Adding the sense of touch to prosthetic limbs could significantly improve an amputee’s quality of life, so there’s a long list of researchers trying to make it happen . Some of those scientists make up one team out of Cleveland, who — according to their paper recently published in Science — have successfully recreated the sense of touch for two men missing an arm in a lab setting. Just like a recent experiment conducted by a team from the EU, this group implanted electrodes around three main nerves in the test subjects’ arm stumps. A machine then sends electrical signals between the electrodes and the prosthesis when it’s attached, something which, the subjects said, felt like electric tingles at first. After a while, though, the researchers learned how to control the patterns and intensities of those signals. Doing so allowed the subjects to recognize the texture of cotton and even sort berries without crushing them — a really big deal, since many other studies are still stuck at the “tingling” stage. Sadly, the researchers still need to better understand how they can manipulate the signals before they can make prostheses that can feel everything: even their two subjects only get to use their high-tech limbs once or twice a month, and only inside the lab. For now, you can watch some of the experiments they’ve conducted in the video below. Filed under: Science Comments Via: Popular Science , AP Source: Science

Follow this link:
Researchers manipulate electrical signals to give prosthetic limbs a sense of touch