rjmarvin writes “Two developers were able to successfully reverse-engineer Dropbox to intercept SSL traffic, bypass two-factor authentication and create open-source clients. They presented their paper, ‘Looking inside the (Drop) box’ (PDF) at USENIX 2013, explaining step-by-step how they were able to succeed where others failed in reverse-engineering a heavily obfuscated application written in Python. They also claimed the generic techniques they used could be applied to reverse-engineer other Frozen python applications: OpenStack, NASA, and a host of Google apps, just to name a few…” Read more of this story at Slashdot. 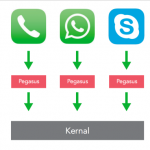