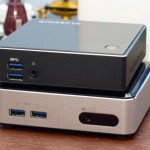 Gigabyte’s AMD Brix (top) is, if anything, even smaller than Intel’s latest NUC (bottom). Andrew Cunningham When AMD sent us the Brix Gaming for review, it wasn’t alone in its box. We were also sent another, smaller Brix with an AMD processor, and it’s the antithesis of its big loud cousin. It’s basically the AMD take on the NUC : a small, quiet, unobtrusive little box that still tries to deliver the features and performance of a full-size entry-level desktop. We originally planned to review both in one shot, but there was so much to say about the Brix Gaming that the GB-BXA8-5545 (say that three times fast) got edged out. Rather than bury it, we’ve decided to give it its own evaluation. It’s the only AMD-powered desktop in the same size category as the NUC that doesn’t use a wimpy netbook-class processor. And as much as Intel’s integrated GPUs have improved in recent years, the name “AMD” still means something when it comes to graphics performance. Surprise, it’s a tiny cube! Like most other mini PCs, the Brix is a tiny box with a small external power supply. Andrew Cunningham Specs at a glance: Gigabyte Brix GB-BXA8-5545 OS Windows 8.1 x64 CPU 1.7GHz AMD A8-5545M, Turbo Boost up to 2.7GHz available with proper BIOS settings RAM 8GB 1333MHz DDR3 (supports up to 16GB) GPU AMD Radeon 8510G (integrated) HDD 128GB Crucial M500 mSATA SSD Networking 2.4GHz 802.11n Wi-Fi, Bluetooth 4.0, Gigabit Ethernet Ports 4x USB 3.0, 1x mini DisplayPort 1.2, 1x HDMI 1.4a, audio Size 4.24” x 4.5” x 1.18” (107.6 x 114.4 29.9 mm) Other perks Kensington lock, VESA mounting bracket Warranty 1 year Price $249.99 (barebones), $494.97 with listed components and software The other Brix boxes we’ve reviewed have been larger and more powerful machines, but the smaller Intel and AMD-based Brixes are a lot more like the original Intel NUC. This one’s a short, square little device that’s actually a little shorter than the NUC. It’s an understated all-black system with matte metal sides and a glossy plastic top, and while it has an external power brick it doesn’t add much to the total size of the package. With the adapters, it’s roughly the size you’d get with standard PC laptops and Ultrabooks, since the Brix uses low-voltage mobile parts rather than full-fledged desktop chips. Read 17 remaining paragraphs | Comments 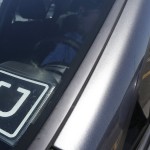