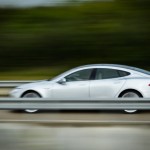 This is the first of two pieces we’re publishing on the all-electric Tesla Model S. The other is a video that documents our journey from Houston to Austin and back in the car, and it can be viewed right here . My videographer Steve uttered a single strained curse as inertia’s invisible hand pushed us back into the leather with enough force to knock the camera mount out of alignment. The Tesla’s acceleration was instant, ludicrous, neck-snapping—more appropriate for a roller-coaster than a car. The camera’s point of view was now skewed sideways from this morning’s careful alignment, but Steve didn’t reach for it because we had just gone from 70 miles per hour to north of 100, and we were still going strong. I should have slowed down, because I-10 out west of Houston is the natural habitat of humorless state troopers, but I didn’t. The breathtakingly flat torque curve of the Model S begs to be explored. The pedal under my right foot was just pure magic . No shifting of gears or howling engine here—the only sound was the ever-increasing rush of air as we hurtled toward the car’s 130 mph limiter. And as we accelerated, my prejudices about electric cars were forcibly rearranged. Read 104 remaining paragraphs | Comments

Taken from:
Review: Tesla Motors all-electric Model S is fast—but is it a good car?