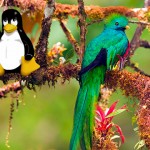 Tux shares a perch with Ubuntu 12.10’s namesake bird Aurich Lawson / Thinkstock Write this down: Ubuntu 12.10, the late-year arrival from Canonical’s six-month standard release factory, marks the first new release within the company’s current long-term support cycle. Got it? Good, because it may be the best takeaway from the latest Ubuntu release, codenamed Quantal Quetzal. After that, it’s a bit of a rocky ride. The product’s development lineage is important to note from more of a business/adoption side perspective. The release of Ubuntu 12.04 LTS in April was Canonical’s fourth long-term support product and signaled the end of one full two-year development cycle. Quantal Quetzal is the first standard release on the road to pushing out Ubuntu 14.04 LTS in Spring 2014 (undoubtedly to be codenamed “Uber-rocking Unicorn” if the pattern holds), and it sets up themes and directions which will mature over the next two years. Standard releases aren’t terribly different from the bi-annual LTS products, though they tend to be slightly less conservative in code offerings. The Ubuntu development community lets off the brakes a little and sticks some shiny back in. Read 63 remaining paragraphs | Comments

IT Contractors In Australia Are Not Being Paid Due To Dispute...