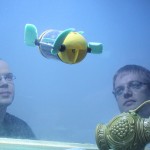 Some shipwrecks are too costly or dangerous for humans to explore, but many underwater robots are too disruptive and unwieldy to serve as substitutes. The Tallinn Institute of Technology’s new U-CAT mapping robot solves that dilemma by imitating one of the ocean’s more graceful creatures: the sea turtle . The small machine uses flippers to get around instead of propellers, preventing it from kicking up silt (which would obscure its camera) and letting it turn on a dime. It’s also autonomous, which helps it venture deep into a wreck without worrying about cables. You’ll only likely see U-CAT in person if you swing by the London Science Museum between November 28th and December 1st. However, it’s likely to have a big impact on underwater archaeology. It will eventually map shipwrecks in the Baltic and Mediterranean Seas as part of the EU’s ARROWS Project , providing more detail than any diver could manage. [Image credit: Tallin University of Technology, Flickr ] Filed under: Robots , Science Comments Gizmag Source: Tallinn University of Technology , ARROWS Project