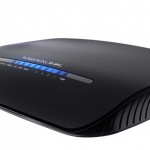 The Medialink router that was reviewed. Mediabridge Update 5/8/2014 19:44 CT:  On Thursday, Mediabridge Products posted an official statement about this incident to its Facebook page, clarifying its position and saying that Amazon has revoked its selling privileges. (Thanks to PrimalxConvoy for the tip). In the statement, the company says that it did not actually sue the Amazon reviewer, but that it did insist that the reviewer’s “untrue, damaging, and disparaging statements” be taken down. “It’s our sincere belief that reasonable people understand that not only is it within our rights to take steps to protect our integrity, but that it should be expected that we would do so when it is recklessly attacked,” Mediabridge Products wrote. “The reviewer has since changed his review completely to remove the libelous statements, but unfortunately not before having an army attack us on the internet.” The company did not give any clue as to the terms of Amazon’s rescinding of Mediabridge’s selling license, but only said at the end of its statement “Unfortunately, as a result of our attempt to get this reviewer to do the right thing & remove his untrue statements about our company, Amazon has revoked our selling privileges. Many hard-working employees whose livelihood depended on that business will likely be put out of a job, by a situation that has been distorted & blown out of proportion.” Read 8 remaining paragraphs | Comments

Police Nation-Wide Use Wall-Penetrating Radars To Peer Into Homes