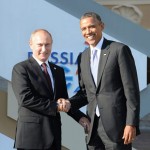 After becoming embroiled in the NSA brouhaha by giving Edward Snowden sanctuary , Russia is again on the defensive after reports suggested it may have slipped G20 leaders compromised devices. A pair of Italian newspapers said that German security experts discovered “USB sticks and recharge cables (that) are suitable for undercover detection of computer data and mobile phones, ” after being alerted by the head of the European council. The Kremlin denied the allegations, calling them “an attempt to switch attention from the (spying) problems that really exist.” Further tests are underway, and if the results are confirmed, may show that Russia has a ways to go to catch up to the NSA’s more sophisticated eavesdropping. Filed under: Misc Comments Source: LA Times