schwit1 writes: The Russians have declared lost the Progress freighter that had been launched to the ISS yesterday. They never could regain control of the craft, plus it was in an incorrect orbit. Moreover, the U.S. Air Force has detected debris nearby, suggesting a significant failure of some kind. The Russians are now considering delaying the next manned launch, scheduled for May 26, while they investigate this failure. Both Soyuz and Progress use some of the same systems, including the radar system that failed on Progress, and they want to make sure the problem won’t pop up on the manned mission. At the same time, they are also considering advancing the launch date of the next Progress to ISS from August 6. Based on these reports, I think they might swap the launch dates for the two flights. A Dragon is scheduled to go to ISS in between these missions, though that schedule could be changed as well to accommodate the Russian plans. Read more of this story at Slashdot. 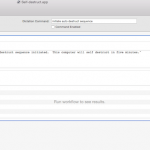 Give Your Mac a Voice-Activated Self Destruct Sequence