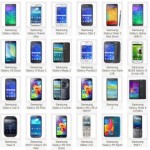 Samsung’s 2014 product lineup. GSM Arena Samsung has been in a pretty tough spot lately. After several quarters of record profits in 2012 and 2013, the company has crashed back down to Earth. The low point for Samsung came last quarter, when it reported a 49 percent drop in profits. At the high end of the market, the company currently has to fight off Apple, which just released a phablet of its own. At the low end, it’s going up against a flood of cheaper Chinese OEMs, led by Xiaomi  and Huawei. To try to get out of this slump, Samsung is taking a “less is more” approach. According to  The Wall Street Journal ,  the company said it would cut its 2015 smartphone lineup by 25-30 percent. The company will work on the internals, too, saying during its last earnings call that it will “increase the number of components shared across mid- to low-end models, so that we can further leverage economies of scale.” The belt-tightening might seem like a big change for Samsung, but the company has so fully flooded the market with smartphone models that a 30 percent cut will barely put a dent in its lineup. And thanks to GSM Arena’s phone database , we can get a pretty good estimate of just how big Samsung’s product lineup is in order to compare it to the competition. Read 5 remaining paragraphs | Comments

More here:
Samsung decides 56 smartphones a year is too many, will cut lineup by 30%