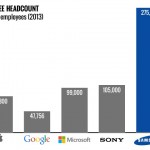 Samsung loves “big.” Its phones are big, its advertising budget is big, and as you’ll see below, its employee headcount is really big, too. Samsung has more employees than Apple, Google, and Microsoft combined . We dug through everyone’s 10-K (or equivalent) SEC filings and came up with this: Samsung Electronics vs the headcounts of other companies. Ron Amadeo At 275,000 employees, Samsung ( just Samsung Electronics) is the size of five Googles! This explains Samsung’s machine-gun-style device output; the company has released around 46 smartphones  and 27 tablets  just in 2014. If we wanted to, we could cut these numbers down some more. Google is going to shed 3,894 employees once it finally gets rid of Motorola. Over half of Apple’s headcount—42,800 employees—is from the retail division, putting the non-retail part of the company at only 37,500 employees. The “Sony” on this chart only means “Sony Electronics,” the part of the company that is most comparable to Samsung Electronics. Sony Group has a massive media arm consisting of Sony Pictures Entertainment, Sony Music Entertainment, and Sony Financial Services. Read 9 remaining paragraphs | Comments