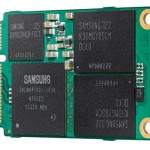 It’s pretty much common knowledge that upgrading to a solid state drive is one of the easiest ways to give an aging machine a shot in the arm, but not everybody considers drive size. The average SSD fits in your standard 2.5-inch drive bay, but Ultrabooks and other thin devices lean on a smaller 1.8-inch mSATA standard — the problem is, these smaller drives don’t always hold as much as their big brothers. Samsung hopes to change that: its latest 840 EVO SSD claims to be the industry’s first 1TB mini-Serial ATA solid state drive. The new SSD fits in to the smaller compact mSATA form factor, but none its predecessor’s core states seem to have changed. The new EVO still promises to read at 540 MB/s and write almost as fast: 520 MB/s. Certainly quick enough to give your old notebook a leg up. Sammy hasn’t released prices just yet (though we’re betting it won’t be cheap), but says the new little big drives should be available sometime later this month. Don’t need a full terabyte? No worries: the 840 EVO mSATA will be available in 120, 250 and 500GB volumes as well. Filed under: Laptops , Samsung Comments Source: Samsung Tomorrow

The Jolt is a $500 electric bike for the masses