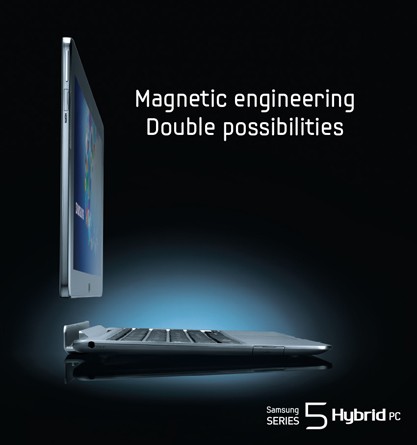 You wanted Windows 8 tablet / laptop mash-ups, you got ’em! On the heels of some rather inventive product launches from Acer and ASUS here at Computex, Samsung is teasing a Win8 device of its own, the Series 5 Hybrid PC. For now, Samsung’s not sharing many technical details — we don’t even know the screen size! — but the concept, at least, is self-explanatory: this is a Transformer-like tablet that slots into an accompanying keyboard dock. In an interesting twist, though, this device doesn’t make use of your run-of-the-mill latch mechanism; instead, the slate attaches magnetically.

The Hybrid is rated for 10 hours of battery life and has a pair of 2- and 8-megapixel cameras. It also supports pen input, and will come bundled with the same S-Pen and S-Memo software used on the Galaxy Note 10.1 (but modified for Windows, of course). This might be a good time to clarify that unlike the 10.1 (or any other Galaxy Tab, for that matter), this is not an ARM-based slate, but rather, an X86 PC. This means, of course, that it runs full Windows 8, and not just the RT version. As it happens, Engadget had the chance to check out a prototype in advance of the launch, and it was running a two-watt Intel Clover Trail CPU. At the time, a Samsung rep told us the company was considering an ultra low voltage notebook-grade processor. Other possible specs: a 1080p display option, with some lower, unspecified resolution offered as well. Lastly, the early model we saw had a USIM slot, a microSD reader and a Superspeed USB port. Keep in mind, though, that all these details are subject to change.

Back when we got a sneak peek at the Hybrid, we handled a non-powered unit, and members of the press were not permitted to take photos or video that day. We can’t speak to the software experience, then, but we did find the build quality to be solid. If the idea of a magnetic hinge gives you the willies, this one seemed quite sturdy — we don’t see the slate slipping out of its cradle without any effort on the part of the user. At 747 grams (1.65 pounds) and 9mm (0.35 inches) thick, it feels denser than similar-looking products like the ASUS Transformer Prime, but then again, this is a fully functioning PC. Though Samsung won’t confirm the screen size, a quick once-over told us it measures between 10 and 11 inches diagonally, matching other Win8 tablets announced this week. For now, this blend of facts and educated guesses will have to suffice, but we’ll naturally hit you back with more particulars as we hear them.