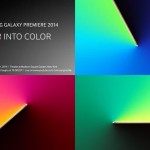 Samsung We’ve previously talked about Samsung’s “flood the market” strategy for phones, but the company applies the same tactic to tablets, too. After releasing the Note 10.1 seven months ago and an entire line of NotePro and TabPro tablets in February, the company has announced yet another tablet event planned for June 12. According to the invite, this event is for the Samsung Galaxy Tab line. While it’s frankly getting harder and harder to try to nail down just what tablet goes where in the Samsung spectrum (which one is the flagship?) the Tabs are usually the mid-range/mainstream devices. This event location would suggest otherwise, though, as it’s being held in The Theater at Madison Square Garden, the former site of the NFL Draft. The event will even be livestreamed on Samsung’s YouTube channel . Rumor has it that this run of tablets will be the first to incorporate Samsung’s AMOLED displays. Samsung’s AMOLED manufacturing has so far not been up to the task of producing a panel large enough or cheaply enough to fit into a tablet, forcing the company’s older devices to use LCDs. Samsung’s AMOLED panels on phones are so mature that it’s difficult to tell the difference between them and LCD, so we aren’t sure how significant this change will be to consumers. The invite seems to confirm the change to AMOLED displays, which shows a top-down view of the new tablets with light gushing from the screen onto the colored background. Read 2 remaining paragraphs | Comments