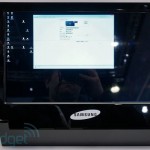 So, it’s not the full laptop setup we were kinda-sorta expecting based on Samsung’s announcement yesterday, but the Korean company’s 13.3-inch 3,200 x 1,800 panel — with a whopping 275 ppi — is still plenty impressive on its own. Though the prototype was connected to a desktop PC rather than installed in a notebook, the demo gave us what we came for: a look at that sheer pixel density. You really have to see it to believe it — with the desktop set to the screen’s native resolution, menus, icons and text all appear tiny . The benefit of such a high resolution, of course, is that you can fit more information on screen, and it’s more than a little reminiscent of Apple’s Retina display . The booth wasn’t equipped with internet access, so we couldn’t test the panel’s mettle with a trip to this very site, but images on the desktop and in Samsung’s pre-loaded PowerPoint looked very bright and crisp. In addition to playing up the pixel count, Samsung touted its prototype as a “green panel,” claiming 30-percent lower power consumption than existing LCDs. And like the flexible LG display we saw just a bit earlier, this screen won’t stay off the market for long: expect a 13.3-inch version — with touch capability — to ship in the next two months, though it may debut on a third-party laptop, not necessarily one manufactured by Samsung. A rep told us that 14- and 15.6-inch versions will follow. Check out our hands-on video and photos for a closer look. Gallery: Samsung 3,200 x 1,800-pixel 13.3-inch display eyes-on Filed under: Displays , Laptops , Samsung Comments

The YouTube app is now available on Roku 3, and it...

Teen Sneaks Past Sleeping Guard to Reach Top of 1 WTC 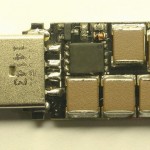