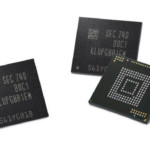 Samsung has begun mass production of the world’s first 512GB embedded Universal Flash Storage (eUFS), meaning its flagship phones can now hold double what they could last year, when the company released its 256GB version. Phones with the new chips can store up to 130 10-minute UHD videos. Read and write performance has been given a boost, too. Sequential read and write speeds reach 860MB per second and 255MB per second respectively — not a huge increase on the 256GB chip but enough transfer a 5GB HD video clip to a solid state hard drive in around six seconds, or more than eight times faster than a standard microSD card. It also has a random read speed of 42, 000 input/output operations per second (IOPS) and a write speed of 40, 000 IOPS. Samsung pitched previous versions of this technology to the automotive market as cars will soon need to record high volumes of sensor data, but says at this time that next-gen smartphones and tablets are the best candidates for the chip, and plans to “steadily increase an aggressive production volume” to meet increasing demand for advanced mobile storage. Via: Business Wire

Install a Windowed GNU/Linux Environment On Any Android Device With This...