Okay, we get it — Samsung sells a lot of handsets and has the profits to show for it. But the company said that its new Galaxy Note 3 is far and away the most successful so far of its entire Note lineup, with 10 million units shipped in a mere 60 days. That’s twice the sales pace of the Galaxy Note II, and even pushing its sales champ , the Galaxy S 4, which took 50 days to hit 10 million units . The Note 3 is available in 58 countries, but Samsung singled out China out as a particularly strong market due to the popularity of the S Pen and just launched two new colors there. Anyway, given those numbers, it’s a safe bet nobody’s using “the ph-word” as an epithet for the Note 3 anymore. Filed under: Cellphones , Mobile , Samsung Comments Source: Samsung (translated) 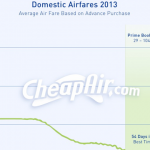 When to Buy Your Plane Ticket, Based on Data from Four...