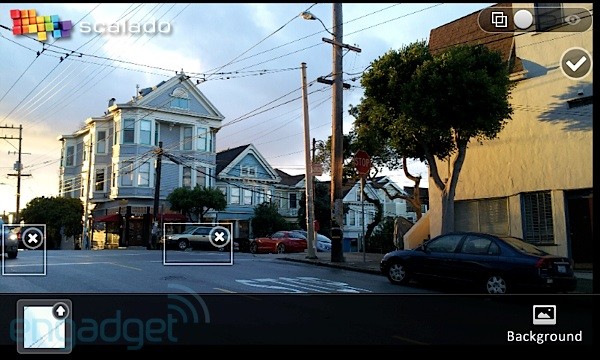 It’s a familar scenario. You’re traveling with a friend and she poses in front of a famous monument. You’re ready to take her picture with your phone but there’s a constant stream of people and vehicles getting in and out of your shot. What are your options? You could wait for the right lull in traffic to press the shutter key or you could use Remove — Scalado‘s patented new object removal technology. Remove captures several images in a row, analyses them and automatically creates a composite photo devoid of unwanted details. Better yet, it highlights potential objects and lets you eliminate them manually. The folks at Scalado — best known for such camera innovations as zero shutter lag and Rewind — are planning to showcase Remove at Mobile World Congress later this month but luckily for you, we got an exclusive first look at an early build of the Remove app for Android.

We installed the app (designed for Gingerbread) on two of Samsung’s flagship devices — our Galaxy Nexus HSPA+ and our global Galaxy S II. The primary UI is simple and looks pretty much like any other basic camera app. Just tap the on-screen shutter key and Remove quickly takes several pictures in a row (the Nexus is about twice as fast as the GS2 here, interestingly). You can touch a second time to stop capture or let the app finish on its own. Remove then magically displays the resulting composite shot which you can save to the gallery by tapping the checkbox at the top right corner of the screen. There’s also a toggle in the same location which lets you switch to a secondary UI that allows you to pick which unwanted details to remove (or keep) from each frame. Of course you can load and re-tweak previous captures at any time to restore (or eliminate) objects after the fact.

Remove introduces a completely new way to capture special moments, and while we experienced occasional issues with the responsiveness of the UI and noticed a couple minors bugs, the app is relatively intuitive and works rather well for a prototype. Take a look at our gallery of sample images and screenshots below and hit the break for the full PR treatment, including Scalado’s concept video.

Scalado Remove clears up your photos, we go hands-on (video) originally appeared on Engadget on Tue, 14 Feb 2012 04:00:00 EDT. Please see our terms for use of feeds.