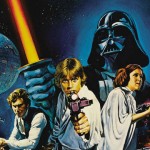 A restored high-definition digital scan, taken from 35mm prints of the original, unmolested version of Star Wars, is now available online to those who are looking. May the celluloid will be with you. Always. While this isn’t the first time that attempts have been made to restore Star Wars to its original theatrical version—that’s the one without the much-maligned CGI effects and edits of later “special” editions—it is the first to have been based entirely on a single 35mm print of the film, rather than cut together from various sources. Here’s a post from the team who located prints and restored the film : Despite having access to the original source, and to all the cleaned footage as the project progressed, I was still completely blown away by the final version. I had no idea it could look so good! Honestly! Way back at the start I had created a comparison clip with the 2006 Bonus DVD on top and the raw scan of LPP on the bottom, in order to see which frames (if any) were missing from the print, and I remember being rather alarmed that it made the GOUT look good!: Creator George Lucas said, in disowning his original work, that all the copies of it were destroyed. “The only issue with Team Negative 1’s version of the film,” reports Mark Walton, “is that it isn’t exactly legal.” Here it is, compared to the official Blu-Ray: https://youtu.be/mo24gFFk7WM https://youtu.be/pFp9bSp-fro https://youtu.be/3Wjx01CuqDs