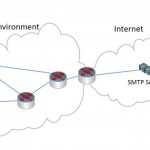 Topology of a covert mesh network that connects air-gapped computers to the Internet. Hanspach and Goetz Computer scientists have developed malware that uses inaudible audio signals to communicate, a capability that allows the malware to covertly transmit keystrokes and other sensitive data even when infected machines have no network connection. The proof-of-concept software—or malicious trojans that adopt the same high-frequency communication methods—could prove especially adept in penetrating highly sensitive environments that routinely place an “air gap” between computers and the outside world. Using nothing more than the built-in microphones and speakers of standard computers, the researchers were able to transmit passwords and other small amounts of data from distances of almost 65 feet. The software can transfer data at much greater distances by employing an acoustical mesh network made up of attacker-controlled devices that repeat the audio signals. The researchers, from Germany’s Fraunhofer Institute for Communication, Information Processing, and Ergonomics , recently disclosed their findings in a paper published in the Journal of Communications . It came a few weeks after a security researcher said his computers were infected with a mysterious piece of malware that used high-frequency transmissions to jump air gaps . The new research neither confirms nor disproves Dragos Ruiu’s claims of the so-called badBIOS infections, but it does show that high-frequency networking is easily within the grasp of today’s malware. Read 6 remaining paragraphs | Comments