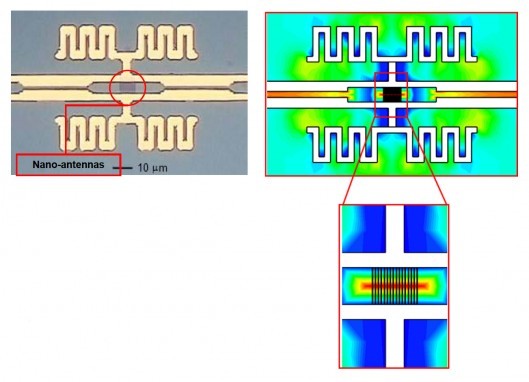 A group of scientists from Imperial College London and Singapore’s Institute of Materials Research and Engineering (IMRE) have developed a new technique that could have far reaching impacts for Star Trek fans everywhere. It all involves something known as Terahertz (THz), or T-rays: electromagnetic rays that have already been used in full-body airport scanners and have the potential to be used across a much broader range of medical and environmental applications. Because every molecule can be uniquely identified within the THz range, these T-rays can be used to pick up on cancerous cells and other biological matter, perhaps even within a Tricorder-like scanner. Now, Imperial College’s Stefan Maier and his team of scientists say they’ve found a way to create a stronger beam of T-rays, using so-called “nano-antennas” to generate an amplified THz field. In fact, this field can produce about 100 times more power than most other THz sources, which could allow for sharper imaging devices. “T-rays promise to revolutionize medical scanning to make it faster and more convenient, potentially relieving patients from the inconvenience of complicated diagnostic procedures and the stress of waiting for accurate results,” Maier explained. “Thanks to modern nanotechnology and nanofabrication, we have made a real breakthrough in the generation of T-rays that takes us a step closer to these new scanning devices.” For more details, check out the links below.