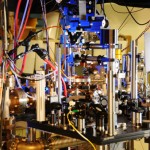 The story of scientific advancement is rarely one of leaps and bounds. More often than not it’s evolution over revolution , and the story of the so-called ytterbium atomic clock fits that bill perfectly. You may remember that in July researchers improved upon the standard, cesium-powered atomic clock model by using a network of lasers to trap and excite strontium ; instead of losing a second every few years, the Optical Lattice Clock only lost a second every three centuries. Researchers at the National Institute of Standards and Technology made a pretty simple tweak to that model: replace the strontium with ytterbium and, voilà, another ten-fold increase in stability. Ten thousand of the rare-earth atoms are held in place, cooled to 10 microKelvin (just a few millionths of a degree above absolute zero) and excited by a laser “tick” 518 trillion times per second. Whereas the average cesium atomic clock must run for roughly five days to achieve its comparatively paltry level of consistency, the ytterbium clock reaches peak stability in just a single second. That stability doesn’t necessarily translate into accuracy, but chances are good that it will. That could could mean more accurate measurements of how gravity effects time and lead to improvements in accuracy for GPS or its future equivalents. The next steps are pretty clear, though hardly simple: to see how much farther the accuracy and stability can be pushed, then shrink the clock down to a size that could fit on a satellite or space ship. The one currently in use at the NIST is roughly the size of a large dinning room table. Filed under: Science , Alt Comments Via: AFP 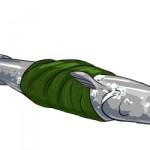 History of sushi (It didn’t start with a California Roll)