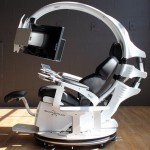 MWE Lab’s Emperor 1510 LX—don’t call it a chair. MWE Labs Science fiction is filled with cherished seats of power, workstations that put the universe a finger-touch or a mere thought away. Darth Vader had his meditation pod, the Engineers of Prometheus had their womb-like control stations, and Captain Kirk has the Captain’s Chair. But no real-life workstation has quite measured up to these fictional seats of power in the way that Martin Carpentier’s Emperor workstations have. The latest “modern working environment” from Carpentier’s Quebec City-based MWE Lab is the Emperor 1510 LX. With a retractable monitor stand that can support up to five monitors (three 27-inch and two 19-inch), a reclining seat with thigh rest, a Bose sound system, and Italian leather upholstery, the Emperor 1510 LX looks more like a futuristic vehicle than a workstation.  And it’s priced like a vehicle, too—it  can soon be yours for the low, low price of $21,500. Tale of the Scorpion In 2006, Carpentier was slaving away as a web designer when he reached a breaking point. He was tired of his tangle of cables, the struggle to manage multiple monitors, and the horrible ergonomics that came with a standard computer desk. Inspired by the emperor scorpion, Carpentier modeled his workstation after its tail, with the monitors suspended at the stinger. Read 12 remaining paragraphs | Comments

View post:
Seat of Power: the computer workstation for the person with everything