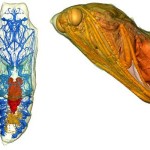 Just like everyone else, you learned about how a caterpillar turns into a butterfly (or moth) inside a chrysalis (or cocoon) and you desperately tried to envision what happens inside and what it looks like. Scientists who’ve opened a lot of chrysalises will tell you the caterpillar turns to goop and then a butterfly, but that’s not completely accurate, and the process of opening one destroys the structure anyway. But now, two teams of scientists have started to captured intimate series of images showing the same caterpillars metamorphosing inside their pupae. Both teams used a technique called micro-CT, in which X-rays capture cross-sections of an object that can be combined into a three-dimensional virtual model. By dissecting these models rather than the actual insects, the teams could see the structures of specific organs, like the guts or breathing tubes. They could also watch the organs change over time by repeatedly scanning the same chrysalis over many days. And since insects tolerate high doses of radiation, this procedure doesn’t seem to harm them, much less kill them. Ed Yong explains more about this technology, and you’ll more pictures of an insect going through the metamorphosis at Not Exactly Rocket Science. Link (Image credit: Lowe et al. 2013. Interface)

Read the original post:
See Inside a Butterfly Chrysalis

US Army May Relax Physical Requirements To Recruit Cyber Warriors