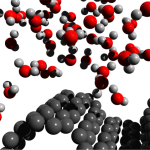 If the bottom is a layer of graphene in a super capacitor, then storage can be increased by making the solution above it as low-volume as possible. Lawrence Livermore National Lab Individual pieces of graphene have some pretty amazing properties, but finding a way to produce bulk materials that make good use of those properties has been rather challenging. Now, researchers have figured out a way to make graphene-based electrodes in bulk through a process so simple that it can be adapted to the manufacturing techniques that we currently use to make paper. And the resulting capacitors, at least in these test cases, had storage capacities that approached those of lead-acid batteries. Those of us who have taken basic physics tend to think of capacitors as two parallel, charge-holding plates, since that’s how they’re taught. But electrochemical capacitors perform a similar trick on a much smaller scale, by having the charges held by individual ions that absorb to an electrode. To boost capacity, the simplest thing to do is to increase the surface area for the ions to interact with. That’s why graphene seems so appealing; since it’s only a single atom thick, it should be possible to stick a tremendous amount of surface into a relatively small volume. The problem, however, has been getting the ions into the graphene itself in order for them to interact. Once the graphene is prepared, lots of factors like pore size and inter-sheet spacing come into play, since these control how quickly ions can get into the graphene. A team at Australia’s Monash University came up with an easy solution to this: put the ions in place during the manufacturing process. Read 4 remaining paragraphs | Comments

Ubuntu 13.04 available Thursday, brings a streamlined footprint to the forefront... 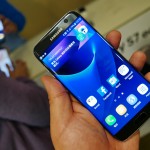