I write a lot about animals for Neatorama and that’s because I’m always reading about them. The coolest thing about the vast variety of critters is that there are so many and each has evolved their own strange adaptations to survive in their own niche of the planet. With each animal trying to carve out its own special place in the world, it’s not too surprising that there are some that had to dig a little harder and have ended up adapting in very strange ways. These six creatures might not seem too strange at first, but just wait until you read more about their bizarre adaptations.

I’d like to give a special thanks to The Proceedings of the Ever So Strange and The Book of Animal Ignorance, both of which greatly contributed to the information in this article. 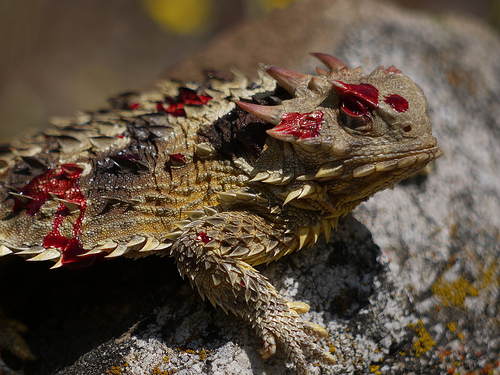 Generally, when you’re being attacked by something that wants to eat you, the last thing you want to do is let them get a taste of your delicious, delicious blood to further entice them. But for critters that aren’t as tasty as us humans, this rule applies less and less. In fact, the Texas horned lizard has blood that tastes so gross that it voluntarily gives predators a taste just to show them that they won’t find any pleasure snacking on the lizard. As if that weren’t strange enough though, the source of the lizard’s blood buffet is even weirder …it launches its fluid sample straight from its eye. Even if the taste of the little critter’s blood wasn’t enough to turn away a potential predator, this horrifying scene certainly is! 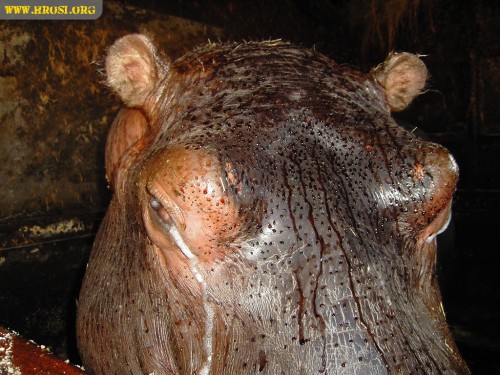 Being the most deadly animal in Africa, the hippo doesn’t have much to worry about in terms of predators. Sure, an occasional lion, croc or hyena might munch on the babies, but once these river monsters grow up, they’re pretty much at the top of the food chain. That’s why their biggest defenses aren’t against other creatures, but against the ravaging African sun and disease-causing bacteria. While rolling around in the mud can work as a natural sunscreen, it’s simply not enough when the majority of their day is spent wading through the river. Instead, hippos have developed their own natural sunscreen, which oozes out of their pores in a shocking, bright red color. This strange secretion has earned the appropriately horrific nickname of “blood sweat,” although it contains neither bodily fluid. Instead, it is made up of a number of highly acidic compounds that absorb ultraviolet light, preventing sunburn, and that inhibit the growth of bacteria. While we usually think of the blood sweat as bright red, it actually comes out clear, turns red and then fades to brown as it becomes exposed to the air. 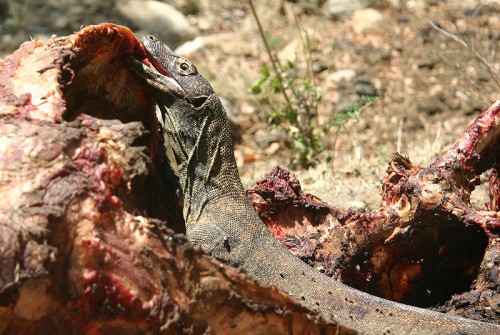 Being stuck on an island with no natural predators, the Komodo dragon already has a good evolutionary hand, growing to become the largest living lizards on earth, reaching almost 10 feet long. But as many lizards will be happy to tell you, “size doesn’t matter,” so the Komodos also evolved a quite nasty way to bring down their prey.

To start with, the Komodos have two small venom glands in their lower jaw that can release toxins that can cause swelling, lowered blood pressure, reduced blood clotting , paralysis, shock, hypothermia and extreme pain. But that’s not enough for these foul lizards. They also have some of the all-around most disgusting mouths of any animal on earth. In fact, their saliva contains E. coli, Staphylococcus, Providencia and other deadly bacteria. Each dragon may have up to 57 different strains of bacteria in their mouth at any given time! While Komodos don’t have any problems hunting smaller animals on their island with a simple bite of the neck and maybe a quick tail whip, they also have it easy when hunting larger creatures like water buffalo (or, occasionally, humans). In fact, the dragon will simply bite the buffalo and then follow it around for a day or two until the prey succumbs to the venom and infections resulting from the Komodo bite.

Scientists still don’t know how the dragons survive with so much nasty stuff in their mouths and they can’t run experiments on the captive populations, because the bacteria die out on dragons that aren’t wild.

Unless you have some sort of rare phobia, chances are, you’ve never found shrimp all that intimidating. If you met the pistol shrimp though, you might change your mind. This crazy crustacean has one disproportionately large claw with two interlocking parts in place of pinchers. When he pulls it back and releases the pressure built up in his claw, it releases a wave of bubbles that contain so much energy that they are as hot as the surface of the sun. The resulting shock waves knock out predators and prey for the shrimp, making his life pretty chill for a small shrimp in the big ocean. 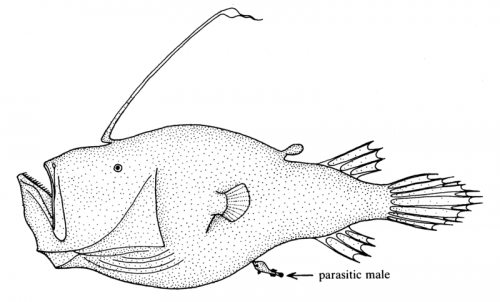 By now, most of you are at least a little familiar with the anglerfish and its strange dangling light orb. Heck, we even sell a cute anglerfish nightlight in the Neatoshop. But what you might not know is that you’ve probably only ever been introduced to the female anglerfish. While plenty of animals display sexual dimorphism to some level, it’s never been quite as drastic as the differences between the male and female anglerfish. In fact, when scientists first discovered the male anglerfish, they thought he was some kind of parasite that fed off of the female …and in a way, they were right.

The male anglerfish is drastically smaller than the female and he does not have a glowing lure on his head and many are so stunted that they can’t eat at all, which means he has to find a female ASAP if he wants to survive. So the male quickly finds a female, bites down on her side and releases an enzyme that dissolves the skin of his mouth and a little of her body so the two can fuse together. Slowly the male atrophies until all that is left of him is a pair of gonads which release sperm whenever the female’s hormones announce that eggs are being released. Scientists have found some anglerfish females with as many as 8 pairs of male gonads attached to their side.

In a small handful of anglerfish species, things can get even weirder if a male can’t find a mate. In these cases, the male will start growing and increase drastically in size, eventually becoming a female himself. 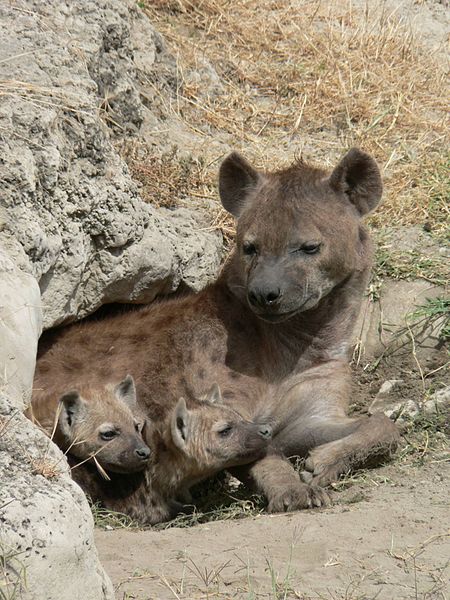 If you’re a mother, I’m sure you don’t need me to tell you that giving birth is no picnic –but just be thankful you aren’t a spotted hyena mother. These poor creatures have a vagina that is fused shut, so intercourse, urination and birth are all performed through the female’s massively large clitoris. The strange organ matches the male’s penis in both size and hardness.

Scientists are still struggling to understand why the female hyena would have evolved this trait. It certainly doesn’t seem beneficial given that one out of every ten births results in the death of the mother and that almost every first-born cub suffocates during birth.

On the upside, while birth may be a serious challenge for female hyenas, they are one of only a handful of creatures that live in a matriarchal society, so at least they have that trade off going for them.

Obviously, there are tons more weird animals with strange adaptations, but these articles have to stop at some point, so maybe I’ll share more with you guys in a future article down the road. Like always though, feel free to share your knowledge relating to the subject in the comments.