One of the few big upgrades in the fourth-generation iPad was the HD front camera, but you wouldn’t know it you’ve been relying on Skype’s standard-definition video calls. Thankfully, a Skype for iPad 4.1 update has just enabled HD video calling for Apple’s latest-generation tablet. There isn’t much more to the release unless you’re craving better call stability, but there’s enough here to justify a visit to the App Store. Filed under: Tablets , Mobile , Apple , Microsoft Comments Source: App Store 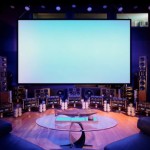 Scientists Have Made the First Truly 3D Microchip