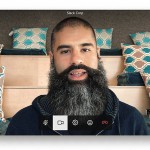 Slack’s quest to become a do-it-all chat app continues. The company is trotting out video calling support in the Mac, Windows and Chrome versions of its client, making it easy to see a coworker or catch up with a friend. Anyone can start a one-on-one chat, while those on paid plans can have calls with as many as 15 people at once — handy for virtual meetings where your voice isn’t enough. This isn’t exactly a revolutionary feature by itself, but Slack adds its signature emoji responses to let you raise your hand or offer approval without interrupting the discussion. You can still tell the app to default to using third-party video services like Google Hangouts, so you’re not locked into Slack’s software. The feature should reach desktop users in the “next few days.” Mobile users aren’t left completely in the lurch, but they won’t get the full experience, unfortunately. They can join an active video call, but only on the audio side. There’s no mention of whether or not video calls are coming to mobile, but that’s likely given Slack’s tendency to mirror features across platforms whenever it can. The upgrade isn’t exactly coming out of left field. Facebook already has a Slack competitor in Workplace , and Microsoft has been signalling that it’s eager to take on Slack with a Skype upgrade. Video calling could keep you from considering rival apps, whether it’s just for video chats or for a wholesale switch. Via: The Next Web Source: Slack