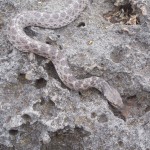 This 18-inch Clarion Nightsnake (Hypsiglena unaocularus), found on black lava rock habitat on the island of Clarion, is darker in color than its mainland relatives and has a distinctive pattern of spots on its head and neck. The Clarion Nightsnake, which was initially discovered in the first half of the 19th century and then struck from the scientific record, was rediscovered and declared a new species by National Museum of Natural History researcher Daniel Mulcahy and a team of Mexican scientists led by ecologist Juan Martínez-Gómez in May 2014. (Photo courtesy of Daniel Mulcahy) A science mystery, solved! After going missing for 78 years, the Clarion nightsnake (Hypsiglena ochrorhyncha unaocularus), a nocturnal snake first discovered in the 19th century, then struck from the scientific record, has been rediscovered. Read the rest 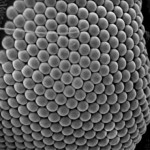